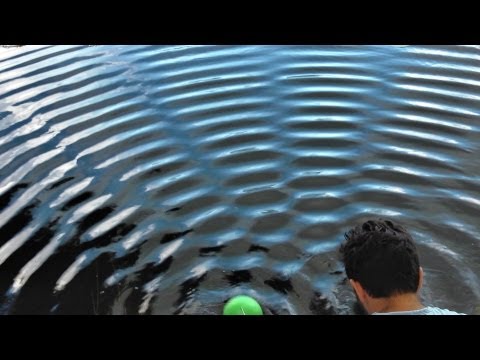 Light is so common that we rarely think about what it really is. But just over two hundred years ago, a groundbreaking experiment answered the question that had occupied physicists for centuries. Is light made up of waves or particles?

The experiment was conducted by Thomas Young and is known as Young's Double Slit Experiment. This famous experiment is actually a simplification of a series of experiments on light conducted by Young. In a completely darkened room, Young allowed a thin beam of sunlight to pass through an aperture on his window and onto two narrow, closely spaced openings (the double slit). This sunlight then cast a shadow onto the wall behind the apparatus. Young found that the light diffracted as it passed through the slits, and then interfered with itself, created a series of light and dark spots. Since the sunlight consists of all colours of the rainbow, these colours were also visible in the projected spots. Young concluded that light consist of waves and not particles since only waves were known to diffract and interfere in exactly the manner that light did in his experiment.

The way I have always seen this experiment performed is with a laser and a manufactured double slit but since the experiment was conducted in 1801 I have always thought that it should be possible to recreate the experiment using sunlight and household materials. That is basically what I did here. I will show the interference pattern I observed with my homemade double slit on 2Veritasium but I chose to use a manufactured double slit here to ensure that the pattern was impressive for observers at the beach.

Special thanks to Henry, Brady, and Rupert for their cameos, Glen for filming and Josh for helping create the apparatus. Thanks also to the Royal Society for allowing us to view the original manuscript of Young's lecture and the University of Sydney for lending the double slits.