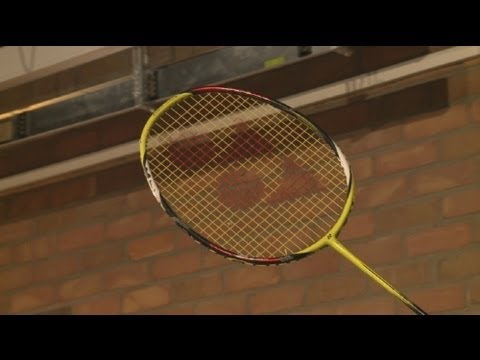 http://www.euronews.com/ Instead of playing badminton with another human being imagine what it would be like playing against a robot. At the Flanders' Mechatronics Technology Centre (FMTC) in Belgium. researchers have built a robot which can do just that - it plays badminton.

A vision system detects the shuttlecock from two visual angles, giving it stereo vision. Once it has estimated the position of the shuttlecock, the robot's software predicts the trajectory. Then an interception system hits it at the right point along the predicted trajectory.

Wim Symens, Technical Director of Flanders' Mechatronics Technology Centre in Leuven, Belgium, said: "We decided to build a badminton robot to demonstrate the new technologies we are developing. The reason we decided on a badminton robot is that we thought it would be a really convincing demonstrator; a real eye catcher. A badminton robot hasn't existed before, it is the first one we are building now and everybody can play against the badminton robot."

The robot can intercept the shuttlecock at speeds of over 400 km per hour, with a response time of only a fraction of second. But this robot is also a guinea pig allowing researchers to test a software application designed to optimise energy efficiency in machine design. Thanks to this application, researchers have already reduced the robot's energy consumption by 50%.